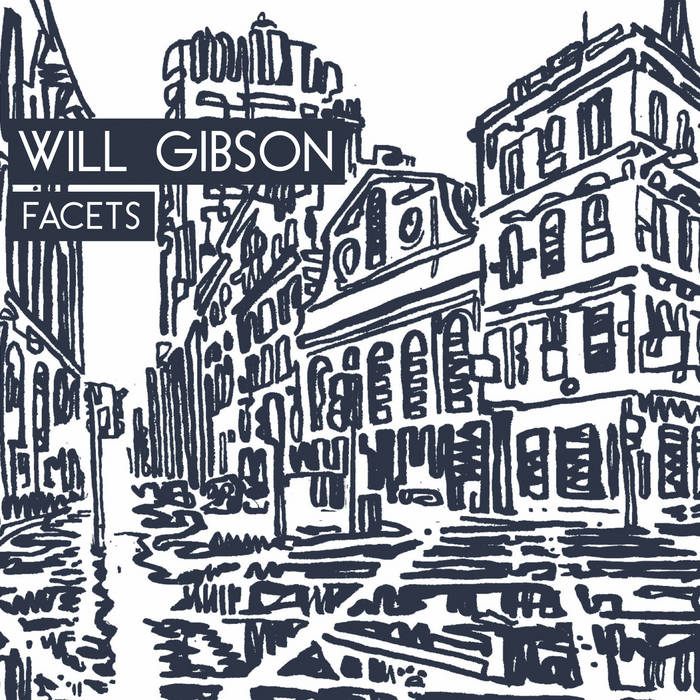 The album commences with the suitably episodic “Storybook”, a nine and a half minute composition that combines a rich blend of colours and textures with a Metheny like sense of melody. Gibson plays bass clarinet in the tunes early stages, combining well with his fellow horn players Jordanous and White. Meanwhile Pringle exhibits a classical lightness of touch at the piano and indeed there’s something of a ‘chamber’ feel about the subtly nuanced opening passages. Gibson later stretches out thoughtfully on tenor, subtly probing above the sensitive support offered by Pringle, Glasgow and Nickolls. Pringle is the second featured soloist, his playing limpid and lyrical. But overall it’s the richly hued ensemble passages that impress the most, the maturity of Gibson’s writing and arranging enhanced by some fine playing and by the skills of an engineering team including Pringle plus Phil Bagenal, Jake Gordon, Jules Jackson and Peter Beckmann.

Events take a livelier turn with the breezy, joyous, subtly funky “Altair” with Pringle here featuring on Fender Rhodes. Again Gibson takes the first solo on tenor, extemporising fluently above the busy grooves generated by Rhodes, electric bass and drums. Glasgow is the next to feature on his distinctive six string bass. Glasgow is a true virtuoso on the instrument and has worked with guitarists Nicolas Meier and David Preston plus drummer Asaf Sirkis since first coming to the attention of the jazz public as a member of saxophonist Tommy Smith’s ‘Karma’ group.

“Ziggurat” maintains the energy levels with some arresting unison horn passages in the tune’s early stages, these well supported by a punchy rhythm section featuring Pringle on Rhodes. Gibson enjoys a series of engaging tenor / guitar exchanges with Appleyard as the latter, a bandleader in his own right, takes the limelight for the first time. Also taking his bow as a soloist is White who impresses with his fluency and inventiveness while bringing a welcome additional earthiness to the music.

“As You Were” is another nine minute epic and one that exhibits many of the same virtues as the opener. A strong melodic theme is stated by Gibson on tenor, this forming the basis for later solos from the expansive but lyrical Pringle on piano and the coolly elegant Appleyard on guitar.
“Troubleshooting” takes the group into more overt funk/fusion territory with Glasgow’s bubbling electric bass groove the bedrock for some bright, brassy unison horn passages. Pringle adds synthesiser and clavinet to his arsenal as Gibson heads the solos with some muscular tenor sax, followed by Jordanous with a skilfully constructed trumpet feature.

As its title might suggest “Light Vessel Automatic” is a far more impressionistic piece with Gibson’s soprano keening gently above a backdrop of atmospherically shimmering Rhodes and Nickolls’ gently brushed drums.

The title track begins quietly with Glasgow’s electric bass pulse and develops gradually to embrace airy sax melodies and a subtly blues tinged guitar solo from Appleyard. Gibson then takes over again with a slow burning tenor solo above a backdrop of layered keyboards and Nickolls’ implacable drum grooves. The drummer is then featured more extensively in the tune’s closing stages as he circumnavigates his kit above an undulating keyboard backwash.

Pringle deploys both Hammond and Rhodes sounds for the seventies style soul jazz/fusion of “Hemispheres”, combining well with Appleyard’s guitar melody lines and the punchy unison horn charts. With Nickolls laying down a propulsive backbeat there are lively features for White on trombone and Jordanous on trumpet with both soloists impressing with their power, imagination and fluency. There are also shorter cameos from the other musicians.

There’s also something of a retro feel on the closing “Secret Path” with its laid back, subtly funky groove underpinning Gibson’s fluent but emotive tenor solo. Appleyard’s guitar sound is heavily treated, to the point that I’m not 100% certain that the next solo is actually his, and Pringle adopts a variety of keyboard sounds.

With its blend of acoustic and electric instruments and mix of jazz styles “Facets” represents an impressively mature début from Gibson. His writing is intelligent and melodic and the playing by an impressive young crop of rising stars is consistently excellent. As ever the presence of Alban Lowe’s distinctive artwork represents something of a bonus. - Ian Mann thejazzmann.com

Will Gibson is an in-demand saxophonist, clarinettist, flautist and composer. He has performed with Alfie Boe, Hamish Stuart, Laura Mvula, Eska, Curtis Stigers, Lisa Hannigan, Shola Ama and Amanda Palmer. Will has also worked for ensembles including the BBC Concert Orchestra, National Symphony Orchestra and the London Jazz Orchestra. ... more

Bandcamp Daily  your guide to the world of Bandcamp